The Impact God Had On Me as a Father

When I was age 10 my dad received Jesus into his heart. It was like a light switch went on in our home. The fighting that was happening daily ceased. My father was reading the Bible. He seemed to take more time with us as kids and got more involved in our lives. We began to go to church and over time that just began to bring about a huge change in our home and in our lives.

If I didn’t have a relationship with God then none of this is possible. It’s like you’re giving God the control and not the control of your life but the belief that he’s gonna lead you in the direction you need to go. It’s just so powerful that I’m getting goosebumps talking about it. Being in his will is the best thing that ever had to happen to me. I’m a living example of what God can do for you and that’s more powerful than anything I can say.

One of the biggest things is the fact that I could forgive my own father now. My father left and he scarred me. But now that I have that relationship with God and I know that I’ve been forgiven for all the mistakes I made in the past. The Lord knows I wasn’t perfect. I’ve been able to forgive my own father. My hope now is that I will see him in heaven. I think that he found that same forgiveness and love through Jesus Christ that I did so that I will get to meet him again in heaven. When it comes to my son, Jacob it’s important for me to be that witness to show him. He has seen the change in me, big time actually. I’m proud of that. He’s been able to see that walked I have now. That I’ve changed and that I’m the type of person I want him to be. I just have to continue to be a witness for Jesus Christ and be that example of Jesus Christ to him. 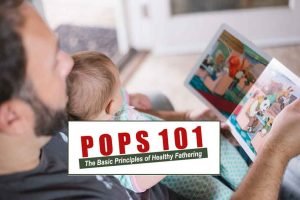 POPS 101 is an introduction to healthy fathering principles. POPS is...
No student enrolled
Donate