During the COVID-19 pandemic, fathers are more important to the stability of their families than ever before.  Join Urban Light Ministries for a seven-part series on how to become a better father during these unprecedented times.  Seven informative videos address the importance of dads in becoming the protectors, order keepers, providers, and stabilizers the family so desperately needs.  The videos are released each Monday morning on Facebook, Youtube and our website.   If you don't want to wait for the videos each week you can click here to register to receive the videos in your email for the next 7 days.  Included with these emails is a downloadable resource page outlining the content in each video.  You can also subscribe to Urban Light Ministries YouTube channel by clicking here.

The winners of the fourth annual Community Fatherhood Awards have been announced. The aim of the Awards is to recognize the significant role Clark County fathers play in their children’s well-being and development and to raise awareness of the value of fathers in the family and the community.  The 2020 winners are:

The awards will be presented on Saturday, June 20, 2020 at 11:00 AM at COHatch in downtown Springfield, Ohio.  For the complete press release click here.

With schools closed and cabin fever setting in during the COVID-19 emergency, Urban Light Ministries is responding by directing parents to kid-friendly video alternatives to television and movies.  Parents can choose from a large library of wholesome, educational, and entertaining videos through a RightNow Media limited-library special offer.

For fathers, Urban Light Ministries is offering free access to their online course POPS 101. The engaging, video-enhanced lessons start dads on a journey to giving their children the best father they can be.

Rewriting the Fatherhood Story Together

Dad - It is Time for You to Engage!

Here is good news. During the COVID-19 Emergency, Urban Light Ministries is offering free access to our online course POPS 101. You will enjoy the engaging, video-enhanced lessons designed to put you on a journey to giving your children the best father you can be. Take POPS 101 at your own pace and receive a certificate at the end! Your family will thank you! Click on the picture above to register. 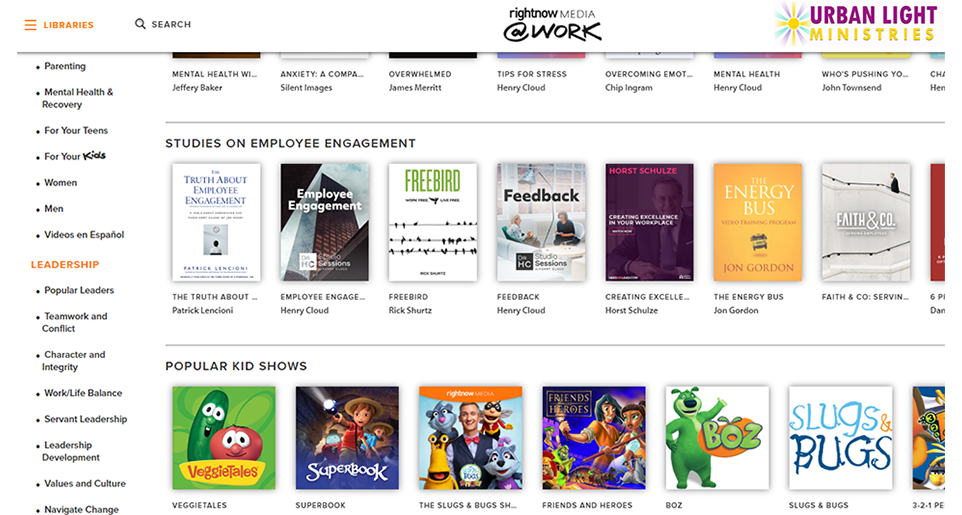 Parents, are you looking for kid-friendly video alternatives to television and movies?

During the COVID-19 Emergency, Urban Light Ministries is offering free access to a treasure trove of high-quality videos for Sonshine Club families. RightNow Media is offering access to a limited library during this pandemic to anyone that is interested.  Choose from this library of wholesome, educational, and entertaining videos. Click the picture above to receive access to these resources.

"Turning the hearts of fathers to their children and the children's hearts to the Heavenly Father."